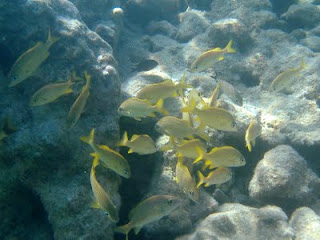 This summer our family spent some time in Mexico. Part of our time was spent at some beaches that had some great snorkeling opportunities. My youngest is 7, and I was certain she would be capable of putting her face in the water to see the fish. We had purchased a special snorkel and mask for her. I pulled her out in an inner-tube to an area with live coral and lots of fish. And I tried to encourage her to take a look under the surface.

Well... for reasons I don't understand, she did not want to put any effort into this, and did not want to risk getting salt water in her eyes, nose or mouth. I had done most of the work for her. I had purchased stuff for her, putting it on her, and pulling her out to the location. All she had to do was trust me and put her face in the water. We had a little discussion, but I was unable to convince her that it would be worth it.

I cut short that swim, and brought her back to shore.

My other daughter did great - she went out a number of times and enjoyed swimming with the colorful fish, and sea turtles. I think she even sort of enjoyed the experience of seeing a stingray, jellyfish, and a barracuda - a mix of joy and fear.

A loving parent will often use forms of punishment or consequences because they want their children to learn something and make better choices next time. Other times there may be consequences without the opportunity for a next time.

But would a loving parent ever give a punishment that is anything similar to the conscious eternal torment that many believe God has planned for his lost children? What would be the purpose or benefit to that?

"For God so loved the world that he gave his one and only Son, that whoever believes in him shall not perish but have eternal life."

"Whoever believes in the Son has eternal life, but whoever rejects the Son will not see life, for God's wrath remains on him."

"For the wages of sin is death, but the gift of God is eternal life in Christ Jesus our Lord."

Email ThisBlogThis!Share to TwitterShare to FacebookShare to Pinterest
Labels: hell