THIS BLOG IS: my personal journey of how I am rethinking some of my spiritual beliefs.
THIS BLOG IS NOT: intended to point fingers at people who I think are wrong.
I do not believe the final judgement will be based on how many correct answers we get on a theology exam. I believe many people throughout history have had genuine relationships with God, despite holding questionable beliefs and practices. I make no claim to having it all figured out or being your judge. If we end up disagreeing over these topics I pray we can find a way to demonstrate grace.

Here are some of my favourite Bible verses.

I believe the world would be a better place if more of us figured out how to live this way.  It is not always as easy as it may sound. It is easier to love people that are similar to us and who are kind to us.  Those who give us the least friction.

I recognize this emphasis the Bible has on loving others, so I tend to use this lens or filter as I read the rest of the Bible.  I recognize people have used the Bible to suport all sorts of ideas and actions. Moving forward I want to read the Bible in a way that helps me grow in my love towards God and all of His creation.

It is hard to teach an old dog new tricks. But I am working on trying to see the others the way God may see them. Praying for them. Caring for them and about them. Valuing the people over the issues.

Posted by Jonathan at 2:16 PM No comments:

Back from 6 Year Break

So yeah, this blog was left silent for over 6 years.  Even though I am slightly embarrased at the obvious angst that I was in for a number of years. I am thinking I may start posting a few more things here.

Why keep the old stuff?

Posted by Jonathan at 7:47 PM No comments:

Err on the side of love 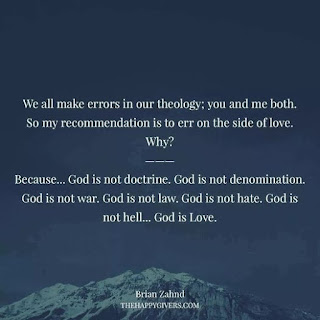 This quote from Brian Zahnd resonates with me these days.  I have been trying to live more this way lately.  Not just in the realms of theology either.

It is within my nature to try to be right, and convince others that I am right.

When I prioritize being right over simply loving others, I am in the wrong... even when I am right.

Posted by Jonathan at 7:34 PM No comments:

Email ThisBlogThis!Share to TwitterShare to FacebookShare to Pinterest
Labels: love

The Wrong Way To Read Your Bible

Throughout history people have interpreted the Bible in different ways to justify all sorts of things.

Jesus tells a parable to illustrate how we sometimes get it wrong.

25 Now an expert in religious law stood up to test Jesus, saying, “Teacher, what must I do to inherit eternal life?” 26 He said to him, “What is written in the law? How do you understand it?” 27 The expert answered, “Love the Lord your God with all your heart, with all your soul, with all your strength, and with all your mind, and love your neighbor as yourself.” 28 Jesus said to him, “You have answered correctly; do this, and you will live.”

29 But the expert, wanting to justify himself, said to Jesus, “And who is my neighbor?” 30 Jesus replied, “A man was going down from Jerusalem to Jericho, and fell into the hands of robbers, who stripped him, beat him up, and went off, leaving him half dead. 31 Now by chance a priest was going down that road, but when he saw the injured man he passed by on the other side. 32 So too a Levite, when he came up to the place and saw him, passed by on the other side. 33 But a Samaritan who was traveling came to where the injured man was, and when he saw him, he felt compassion for him. 34 He went up to him and bandaged his wounds, pouring oil and wine on them. Then he put him on his own animal, brought him to an inn, and took care of him. 35 The next day he took out two silver coins and gave them to the innkeeper, saying, ‘Take care of him, and whatever else you spend, I will repay you when I come back this way.’ 36 Which of these three do you think became a neighbor to the man who fell into the hands of the robbers?” 37 The expert in religious law said, “The one who showed mercy to him.” So Jesus said to him, “Go and do the same.”

The Wrong Way To Read The Bible:

The Bible has rule for that. The Bible teaches that we should avoid dead people, so if I see someone who is dead or close to dead, I'm going to avoid getting involved.  This seems to be why the priest and Levite avoided helping the injured man in this story.  They assumed following these rules was the right thing to do in this situation.

Here are the Bible verses that likely motivated the response of the priest and Levite:

“Whoever touches the corpse of any person will be ceremonially unclean seven days.  He must purify himself with water on the third day and on the seventh day, and so will be clean. But if he does not purify himself on the third day and the seventh day, then he will not be clean.  Anyone who touches the corpse of any dead person and does not purify himself defiles the tabernacle of the Lord. And that person must be cut off from Israel, because the water of purification was not sprinkled on him. He will be unclean; his uncleanness remains on him."

The Lord said to Moses: “Say to the priests, the sons of Aaron—say to them, ‘For a dead person no priest is to defile himself among his people, except for his close relative who is near to him: his mother, his father, his son, his daughter, his brother,

Jesus knows the rules, however

The way Jesus tells the story, it is easy to see that the right thing to do was to respond with love and compassion - like the Samaritan did.

A simple guide to reading the Bible:

If the way you read the Bible makes it harder to love someone, you are likely missing something.
A full understanding of the message of the Bible should always help you grow in your love towards God and others.

When we add up all we learn from the Bible the result should be love.
Posted by Jonathan at 6:58 PM No comments: 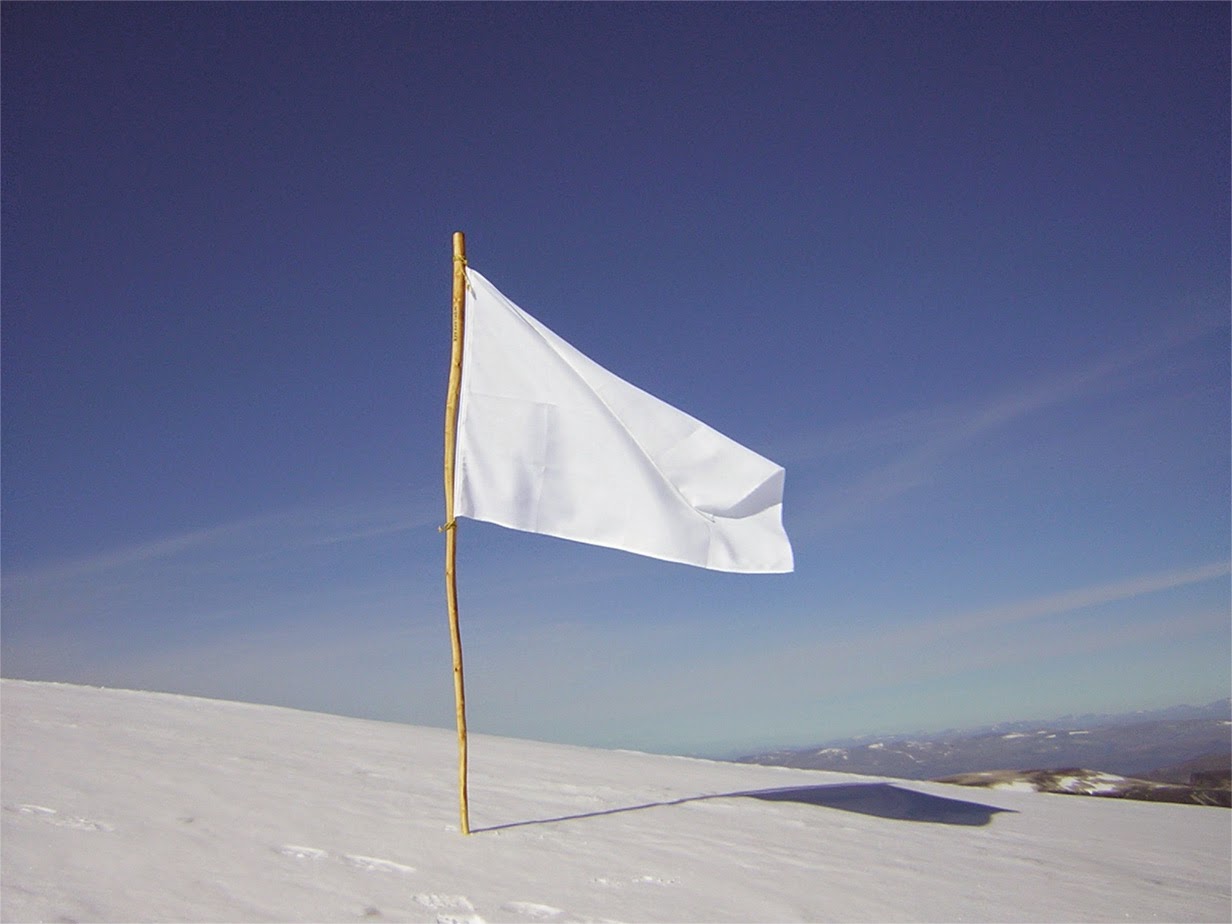 I'm not a huge fan of war in real life.  I pray I never have to participate in one. The ideal world would be one where there is no war, always peace. But I recognize dreaming of our world without war may be just a dream. I also recognize that many of the freedoms we enjoy today are a result of battles fought by others before my time.

The same applies to the wars in Christ's church that have divided and reformed over the years. I also dream of a day when the Church would recognize that it is one, and that there would be peace. The prayer for Christian unity was the starting point of my journey that got me blogging 6 years ago.  However throughout the history of the church many battles have been fought.  I recognize that some of those battles have brought new understandings of the freedom and life Christ is offering us.

But I'm not a huge fan of war.

I believe aspects of my blog has been more than pushing forward different fronts in different battles.  For myself it has largely been a tool I have used to process different beliefs.  Sorting through beliefs and traditions that have been handed down to me, testing them against Scripture, and looking at alternative ways of interpreting Scripture related to that topic.  I enjoy theological dialogues. I enjoy gaining fresh perspectives of how Scripture can be interpreted.  I enjoy grappling through issues that have polarized the church, and trying to find balance within the tensions.  I enjoy the teaching one another that can sometimes occur in on-line discussions.

But I understand I am in the minority here.  I get that most people do not welcome questions that challenge beliefs they hold to.  So my pushing and questioning here naturally creates an equal and opposite reaction from others.

I still believe the Church is entering another reformation. Some of the changes I feel are taking place:
I pray that at the end of the day Christ's people reflect more of the love and grace of Christ's that we all proclaim.

However at this point I am questioning if my little contributions to the cause are worth it.

My default is for the way of peace.   I do not enjoy tension. I do not like mis-trust. I do not enjoy causing pain, or receiving pain.  These all come in varying degrees whenever we engage in any sort of conflict or debate.  I've known and accepted this all along.  But I sense it may be time to wave the white flag of truce.

I've likely written enough here on this blog.  If someone wants to openly dialogue or discuss any of these topics they can contact me or find others who are also engaged in such discussions.

I was accused recently of not believing in a literal hell.  I find it interesting that I could be so misunderstood.

Gehenna's meaning literally means  the "Valley of the son of Hinnom". Some believe that in Jesus' day it was the location of a garbage dump that had fires continually burning to consume the filth and cadavers thrown in it (others question the burning garbage dump explanation).

Some Jews of Jesus' day held some spiritual beliefs about this literal place called Gehenna as well. Gehenna was viewed as the place of punishment or destruction of the wicked. Gehenna was considered a Purgatory-like place where the wicked go to suffer until they had atoned for their sins. It was stated that the maximum amount of time a sinner could spend in Gehenna was one year, with the exception of five people who are there for all of eternity.

I believe Jesus believed in a literal place called Gehenna.  He spoke about fires of Gehenna, and spoke about bodies being thrown into it.  The way he talked about Gehenna makes it sound like it was a bad place that nobody wanted to end up in.

I don't know if Jesus' had similar spiritual views about Gehenna as some other Jews of his day held.

But I do assume that Jesus believed in the literal Gehenna, and he possibly held some of the non-literal views other Jews of that time held.

So I believe there was a literal place called Gehenna, and tend to lean towards an understanding of a literal 'eternal life' for some, and literally not eternal life for others.

So feel free to accuse me of believing in a literal reading of Scripture in this case. :)