Paul Proclaiming the Kingdom of God 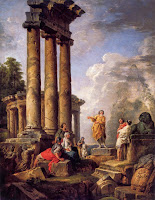 In Acts and into the epistles we see Paul proclaiming the message of the kingdom (reign/rule/authority) of God from town to town.

"So Paul entered the synagogue and spoke out fearlessly for three months, addressing and convincing them about the kingdom of God." Acts 19:8 NET

“And now I know that none of you among whom I went around proclaiming the kingdom will see me again." Acts 20:25 NET

"They set a day to meet with him, and they came to him where he was staying in even greater numbers. From morning until evening he explained things to them, testifying about the kingdom of God and trying to convince them about Jesus from both the law of Moses and the prophets."  Acts 28:23 NET

"proclaiming the kingdom of God and teaching about the Lord Jesus Christ with complete boldness and without restriction." Acts 28:31 NET

"For the kingdom of God does not consist of food and drink, but righteousness, peace, and joy in the Holy Spirit." Romans 14:17 NET

"For the kingdom of God is demonstrated not in idle talk but with power." 1 Corinthians 4:20 NET

The above verses show that Paul was committed to proclaiming the kingdom of God wherever he went. We see similar passages relating to the disciples in the gospels.

"Jesus sends out His 12 disciples: On your way proclaim (preach) that the kingdom (reign, rule, authority) of heaven (or God) is at hand." Matt 10:7

"Then they (the 12 disciples) set out and went from village to village, proclaiming the gospel (good news) and curing people everywhere." Luke 9:6

The disciples were obviously following the example of Jesus, as he was known to go from town to town proclaiming the good news (gospel) of the kingdom/reign/rule/authority of God.

"Jesus went all through Galilee, teaching in their Synagogues, proclaiming (preaching) the gospel (good news) of the kingdom (reign, rule, authority, realm, dominion), and curing every kind of disease and every kind of sickness among the people;" Mat 4:23

"Jesus went around all the towns and the villages, teaching in their Synagogues, proclaiming (preaching) the gospel (good news) of the kingdom (reign, rule, authority, dominion, realm), and curing every kind of disease and every kind of sickness." Matthew 9:35

"Jesus went to Galilee, proclaiming (preaching) the gospel (good news) of God —“The time has come, and the kingdom (rule, reign, authority) of God is at hand; repent (change your way of thinking), and believe the good news.” Mar 1:14-15

"Jesus, however, said to them: “I must take the good news (gospel) of the kingdom (reign, rule, authority, dominion) of God to the other town also, for that was why I was sent.” Luke 4:43

"Shortly afterwards, Jesus went on a journey through the towns and villages, proclaiming (preaching) the good news (gospel) of the kingdom (rule, reign, authority, dominion) of God." Luke 8:1

My point here is that it would be wrong to assume the gospel message Paul preached was any different than the good news of the kingdom of God that Jesus and His disciples proclaimed.  Verses like the following should be read keeping in mind what message we know was proclaimed by Paul, Jesus, and the other disciples.  It would be wrong to assume Paul was proclaiming a new or different gospel message.


"not that there really is another gospel, but there are some who are disturbing you and wanting to distort the gospel of Christ." Galatians 1:7


"in the power of signs and wonders, in the power of the Spirit of God. So from Jerusalem even as far as Illyricum I have fully preached the gospel of Christ (the anointed King)." Romans 15:19 NET

"Now to him who is able to strengthen you according to my gospel and the proclamation of Jesus Christ (the anointed King), according to the revelation of the mystery that had been kept secret for long ages," Romans 16:25


"Remember Jesus Christ (the anointed King), raised from the dead, a descendant of David; such is my gospel," 2 Timothy 2:8

"Now I want to make clear for you, brothers and sisters, the gospel that I preached to you, that you received and on which you stand, and by which you are being saved, if you hold firmly to the message I preached to you—unless you believed in vain. For I passed on to you as of first importance what I also received—that Christ (the anointed King) died for our sins according to the scriptures, and that he was buried, and that he was raised on the third day according to the scriptures," 1 Corinthians 15:1 -4


When Paul proclaimed the gospel, he was proclaiming that Jesus was Christ, the anointed King, the messiah.  He was proclaiming Jesus as both Lord and Savior.  Paul was an example of someone who followed the commands in the following verses.

Then he said to them: “Go into all the world, and proclaim the gospel (good news) to all creation. Mark 16:15

"And this gospel of the kingdom will be preached in the whole world as a testimony to all nations, and then the end will come." Matthew 24:14

My desire is to also proclaim the gospel of God's kingdom (reign/rule/authority).  To proclaim that it is good news that Jesus is Lord and Savior.

Posted by Jonathan at 7:22 AM No comments: