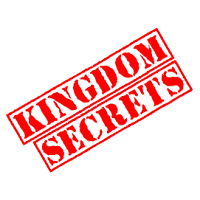 Continuing my series on the secrets of the kingdom.


“Listen to another parable: There was a man, a landowner, who planted a vineyard, put a fence around it, dug a winepress in it, and built a watchtower. He leased it to tenant farmers and went away. When the grape harvest drew near, he sent his slaves to the farmers to collect his fruit.  But the farmers took his slaves, beat one, killed another, and stoned a third.  Again, he sent other slaves, more than the first group, and they did the same to them.  Finally, he sent his son to them. ‘They will respect my son,’ he said.  “But when the tenant farmers saw the son, they said among themselves, ‘This is the heir. Come, let’s kill him and take his inheritance!’  So they seized him, threw him out of the vineyard, and killed him.  Therefore, when the owner of the vineyard comes, what will he do to those farmers?”  “He will completely destroy those terrible men,” they told Him, “and lease his vineyard to other farmers who will give him his produce at the harvest.” Jesus said to them, “Have you never read in the Scriptures: The stone that the builders rejected has become the cornerstone. This came from the Lord and is wonderful in our eyes? Therefore I tell you, the kingdom of God will be taken away from you and given to a nation producing its fruit.  Whoever falls on this stone will be broken to pieces; but on whoever it falls, it will grind him to powder!” When the chief priests and the Pharisees heard His parables, they knew He was speaking about them.  Although they were looking for a way to arrest Him, they feared the crowds, because they regarded Him as a prophet.

Here is another parable where Jesus speaks of the kingdom of God.


the kingdom of God will be taken away from you...

I welcome your feedback.  Does Jesus take away the kingdom, or is this simply a natural result of how the story goes?  I can't say I fully understand this part.

... and given to a nation producing its fruit.

Some translation say "and given to a people producing the fruit of it".

So what type of people would "get" the kingdom of God?  I can't help but think of Gal 5:22 - 23, a familiar verse about what the  "fruit" of the Spirit is.  I'll make the connection then that those who produce the fruit of the Spirit are also those who are part of the kingdom or reign of God. Those with love, joy, peace, patience, kindness, goodness, faithfulness, gentleness and self control.

Here are some other verses that speak to who 'gets' the kingdom:


“Blessed are the poor in spirit,
for theirs is the kingdom of heaven. (Matt 5:3 NIV)

Blessed are those who are persecuted because of righteousness,
for theirs is the kingdom of heaven. (Matt 5:10 NIV)


Looking at his disciples, he said: “Blessed are you who are poor, for yours is the kingdom of God. Luke 6:20 (NIV)


"Listen, my dear brothers and sisters: Has not God chosen those who are poor in the eyes of the world to be rich in faith and to inherit the kingdom he promised those who love him?" James 2:5 (NIV)

This parable speaks of people who were  given responsibility, and the task to produce fruit for the master.  If the Priests and religious leaders were somehow the keepers of the kingdom of God in the days before Jesus, it sounds like things were going to change.  God had entrusted these men to care for His kingdom, but it seems they wanted to claim the kingdom for themselves.

So when Jesus comes things change.  A different type of people are given the responsibility of caring for the kingdom and producing fruit for the master.   He doesn't just replace the old religious leaders with a new set of religious leaders. It seems this time he entrusts His kingdom to the least, the poor, and the lowly ones.