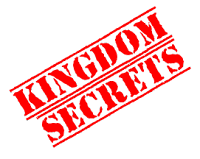 I am continuing my series on the secrets of the kingdom, taking a look today at Mark 3:22-30 (NIV)


And the teachers of the law who came down from Jerusalem said, “He is possessed by Beelzebub! By the prince of demons he is driving out demons.”
So Jesus called them and spoke to them in parables: “How can Satan drive out Satan?  If a kingdom is divided against itself, that kingdom cannot stand.  If a house is divided against itself, that house cannot stand.  And if Satan opposes himself and is divided, he cannot stand; his end has come.  In fact, no one can enter a strong man’s house and carry off his possessions unless he first ties up the strong man. Then he can rob his house.  I tell you the truth, all the sins and blasphemies of men will be forgiven them.  But whoever blasphemes against the Holy Spirit will never be forgiven; he is guilty of an eternal sin.”
He said this because they were saying, “He has an evil spirit.”

Jesus was being accused of working for Satan's kingdom.

But Jesus points out it wouldn't make sense for a member of Satan's kingdom to be at work fighting against the kingdom of darkness. Jesus was at work here casting out demons.

It is in the absurdity of this scenario that Jesus uses the strong language of blasphemy against the Holy Spirit. How could someone dare attribute God's work to the work of the devil?  Who would do such a thing?

Have you ever heard a Christian judge other Christians to the degree that they are questioning which kingdom they are working for? I think this may be similar to what Jesus was talking about here. If someone is doing work for the kingdom of God, active in battle against the kingdom of darkness, it would be a blasphemy against the Holy Spirit to judge otherwise.

Do you think God's kingdom is divided?

If you find yourself opposing God's working in others... that's a dangerous place to be.

I agree it is often difficult to tell who is a member of one kingdom or the other. But in most cases it is not up to us to judge.  I suspect many of us have been guilty of judging other members of God's kingdom - of this we should repent.
Posted by Jonathan at 9:13 AM

Email ThisBlogThis!Share to TwitterShare to FacebookShare to Pinterest
Labels: do not judge, kingdom secrets

"But in most cases it is not up to us to judge."

I don't think we should ever judge. We just can't know and it's not our business to know.

"The wheat and tares grow together."