THIS BLOG IS: my personal journey of how I am rethinking some of my spiritual beliefs.
THIS BLOG IS NOT: intended to point fingers at people who I think are wrong.
I do not believe the final judgement will be based on how many correct answers we get on a theology exam. I believe many people throughout history have had genuine relationships with God, despite holding questionable beliefs and practices. I make no claim to having it all figured out or being your judge. If we end up disagreeing over these topics I pray we can find a way to demonstrate grace. 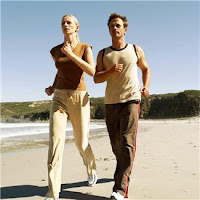 I went jogging last night with some friends.  If it wasn't for the invitation to join them, I likely would have stayed on the couch.  Even though the roads and sidewalks are a bit slippery this time of year, it was good to get out for that jog.

I have always thought I was a decent jogger.  I recall being the best runner at my high school.  But that was a few years ago, and I was a few pounds lighter.  In recent years, my body can't go as far as my mind thinks it can.

I wonder if I should join a running Club.

Joining a running club has some benefits.


I sometimes like running alone. But I do understand the benifits of running with others.  And there are some benifits with making some commitment to a running club.

Yes, running with others is better than running alone.  And there is nothing wrong with joining a running club.  I guess for me a running club should be primarily about helping each member run better whatever races they are aiming to be a part of.

The more I think of it, the less structure the better. Personally, I'm happy just getting together with a few guys now and then to run together.

I think back to my high school races again. Twice at province wide races I ended up making a wrong turn because I wasn't running close enough to others.  I still have regrets about running the wrong direction for just a minute (downhill) and ruining my chances at an honorable finish.  I wish I had been running with others at those moments of those races.

As usual I'd love to hear your thoughts.